History of the Nanton Grain Elevators: 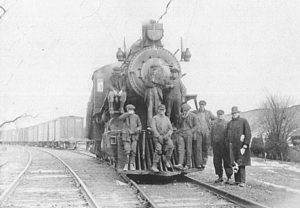 The connection between the pioneers, railways and elevators goes back to the late 1800’s and early 1900’s. The Canadian railways advertised in the United Kingdom, Europe and elsewhere to attract settlers to western Canada with the lure of free land (or nearly free) $10 per quarter section (160 acres) or 6.25 cents per acre. Today this land is valued at around $2000 per acre.

In the advertising to attract people to settle the west there was an avoidance of mentioning the prairie winters. The winter turned out to be much more severe than some settlers had expected.

The settlers came in large numbers mainly from Europe, the United Kingdom and the United States to settle the west. Towns sprang up almost overnight around railroad stations. The railroad brought in both the new settlers along with supplies and mail. They also provided a vital communications link to the rest of the world through the railroads telegraph system. 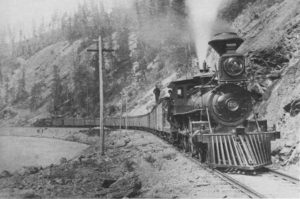 The first railroad station agent in Nanton was a gentleman by the name of William Allen. His grandson, Jim Coutts, was an honorary member of the Discovery Centre’s Board of Directors. Coutts was born in High River and raised in Nanton; he passed away on December 31, 2013.

Grain elevators were spaced about 5 – 8 miles (8-13 km) apart. As all the grain came to the elevators by horses, mules or oxen, this was considered a good day’s haul with wagons or sleighs depending on the weather. Many towns such as Nanton, Parkland and Cayley had 5-6 elevators owned by different companies. Smaller towns may have had only one or two elevators.

Wagons and sleighs have been replaced today by trucks of all sizes from the small ½ ton all the way up to the “Super B” double trailers seen hauling on the highways today. 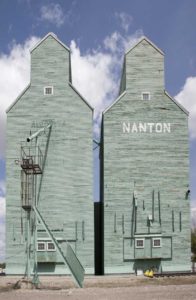 Pioneer Grain’s first elevator was built in 1929. Initially the elevator’s capacity was 56,000 bushels, but this was increased ten years after the elevator was constructed in 1939, two annexes were added with capacities of 17,000 and 11,000 bushels for a total of 84,000 bushels.

Pioneer expanded the elevator in Nanton shortly after its acquisition. In 1956, a more substantial annex with a capacity of 34,000 bushels was constructed for the elevator and the smaller annexes were demolished. This provided Pioneer a total capacity of 90,000 bushels.

In 1982, Pioneer Grain completed an extensive upgrade on the Nanton elevator. Two steel bins were added to the facility, which brought the capacity of the elevator to over 100,000 bushels. The installation of a 60 tonne, 70-foot scale made the facility capable of handling larger farm and commercial trucks.

Other services some of the elevator provided were:

Elevators were also social centers where everything from politics, grain prices and sports were discussed….some over a card game. 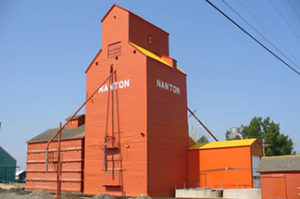 The elevator was shut down in March 2001 and the steel bins were sold in 2004 to Bear Trap Feeders, to enable the Society to have money to start the restoration.

Josh Green and Willard Kjinserdahl of Nanton district were the first farmers to deliver grain to the newly upgraded elevator.